After the corporate separation of the Bertelsmann Group, Sony Music will again re-establish its own corporate identity at a new site. This should be reflected in the address, the type of office concept and the work culture.
Analogous to the corporate culture of Sony which, of course, is already being experienced at other locations in the world, the primary goal of the spatial restructuring is the change from classical single and double offices from the former publishing structure towards an open, communicative office world.

The move towards a modern, flexible office should be able to strengthen and promote the communication between the departments and the labels, and respond flexibly to the future demands of the company. From these parameters, a specific requirement profile has been created with which the property information provided by the real estate business CBRE Real Estate could be evaluated in terms of location, infrastructure, efficiency and flexibility.

The choice fell on the location of „neue balan“, a revitalized office and commercial area in the south of Munich which, on its „Campus of Ideas“, offers multiple uses of loft office space for work and educational institutions, through to local amenities and infrastructure facilities. With the newly created building of the „Haus 31“, the particular aesthetic industry flair of the 1950s has been reissued by facades in the reduced Bauhaus style with excessive black and white contrast. At the same time, the building takes into account today‘s requirements for energy efficiency and sustainability. The raw, industrial character of the new construction allows maximum flexibility in its use and high technical standards for the creation of modern working environments.

The challenges and opportunities that arise from spatial variations are manifold. The change in site and office concept contributes to evaluating and optimising ingrained work flows, as well as creating new areas for work and communication.

CSMM also accompanied, beyond the classic user demand management, the change from a fully serviced office space provided by Bertelsmann to independence at a new location with the operation of their own shared services such as a post office, the IT and facility management. In the change management, the cultural evolution associated with these changes was accompanied by CSMM. In order to develop the best possible result for the special requirements of a music company, the operational and office space concept was jointly developed with the users from the beginning.

The fundamental approach of CSMM differs from the conventional process of ‘space programming – occupancy planning – implementation‘. The question goes deeper into the structure of the working environment – to the question of work processes and their potential for optimisation, to the values of the company that are to be passed on, the communication and management culture; the appropriate office concept is finally developed based on the answers to these questions. Instead of constructing premature visual imagery, the framework of the project and the potential process for optimisation will be defined first. A top priority, in addition to an attractive design, is the organisation of office work processes to increase the amount of added value.

For Sony, a drafted and moderated 3-stage workshop process was used by CSMM in which, together with the management, the internal project management and representatives of all departments, the foundations for the further space allocation planning could be developed.

In the case of Sony, the specificity of the requirement profile consists of a mix of ‘normal’ work places with typical requirements for office tasks, as well as of a number of special work places that arise from the specific needs of the music business. For the music boxes, within which work-related music is heard, the subject of acoustics and media technology must be questioned intensively, as there must be also places of rest and concentration, or spontaneous brainstorming. In order to approach the complexity of the task in tangible steps, the collected requirements were divided into three sub-projects – work places, IT and office support spaces – clustered and worked on in various steps and with the respective decision makers.

That realisation was not decided according to the top-down approach, but could be implemented as a jointly drafted result, speaks for the foresight of management. The early involvement of representatives of the departments is beneficial for the later acceptance of spatial change and cultural identity.
Here, CSMM makes the pitch available, the utilisation of which is the responsibility of the company and employees. An accompanying project book transparently details the processes and steps for decision making, budget and deadlines for all parties involved.

With the move to the “Neue Balan” complex, we have opened a new chapter for Sony Music Entertainment: Openness, design and technology have turned our new office into a creativity centre and meeting place. And what’s more, in this way we have made a successful start on our journey of transformation from record label to digital entertainment company. 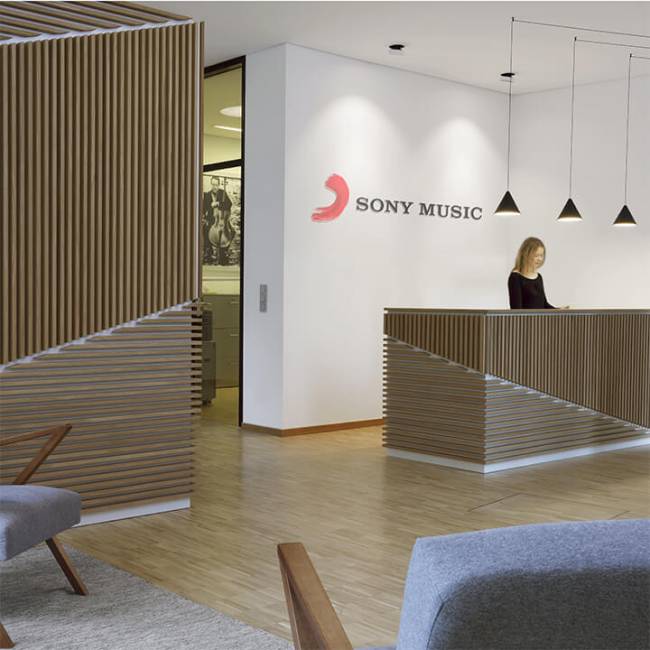