Our Munich office supports the way we work perfectly. We can quickly and flexibly remodel it for the constantly changing project environment. However, the opportunities offered by the hall as an event site are at least equally valuable as well. Whether for the UBX conference which we organised ourselves or for a development community using the hall for a hackathon.

Even virtual creativity needs physical space. Looking at the photos of Virtual Identity in their Thalkirchen Station office, you may well think that they show nothing more than a typically cool advertising agency and their innovative office space. The aim of the project you will read about below, however, was not to bring a cliché to life: it was the result of a long period of analysis, thorough consultation with the parties involved and a vision, developed closely with the company‘s management, of how people can work together effectively and harmoniously. The resulting design shows how the outcomes of this sort of close cooperation can be applied coherently and consistently within a structured planning process.

Over the past few years, the advertising agency Virtual Identity has become more and more successful. The agency‘s growing success was increasingly reflected in its office space, which had also continued to grow organically. In a back building in the heart of Schwabing, Virtual Identity became dispersed over a number of different floors and neighbouring buildings. The agency filled this space to its limits and the structure of their office was dictated by the constraints of the buildings they occupied, increasingly frustrating internal communication and interfering with the development of a shared office culture.

In the step towards freedom and a modern, more flexible office environment, a unique concept was needed in a new, as-yet-to-be-found location. Virtual Identity‘s management team entrusted oversight of this process to CSMM‘s interdisciplinary team. Key to the concept was a flexible, future-proof
office structure and identity-establishing communication centre that would do justice to Virtual Identity‘s creative, cross-project work.

Before leasing a property, CSMM and Virtual Identity created a requirements profile that could be used to assess the general feasibility, space efficiency and potential of the new office areas. The development of a space allocation plan and an area plan was a further, crucial step. CSMM therefore undertook an advance assessment of Virtual Identity‘s internal processes to determine the overall set-up of the new office.

A potential location for the office had also been found: Thalkirchen Station, a listed building which was in the process of being redeveloped into a campus of offices.

The results of CSMM‘s analysis were ready time for the initial meeting with the building owner to discuss the lease. Since CSMM was involved in the project early on and the property developer had not yet completed the project schedule, this presented a great opportunity for the lessees to influence the development and negotiate relevant terms and responsibilities within the lease.

The landlord‘s existing concept meant that the requirements set out in Virtual Identity‘s requirements profile would not be feasible. In the original development, maximum use was to have been made of the leased space, with a gallery installed as a fully-fledged second floor in the hall area. This, however, would have significantly detracted from the loft style of the space and negated the charm of the old repair shop.

Using the results of their initial work and analyses, CSMM then worked closely with Virtual Identity to design a bespoke office concept that would fit the structure of the building and the strict preservation orders set in place.

The workshops moderated by CSMM were important tools in this process and were designed to produce joint responses to questions concerning the optimisation of work processes and on how best to convey the company‘s values, management culture and communication culture. The far-sighted decision of Virtual Identity‘s management team to include staff in the design phase encouraged staff buy-in. It also enabled them to work with relevant Key Account staff to develop some „rules“ for the future office, with the aim of creating an environment that people would enjoying working, learning and relaxing in.

CSMM created a 1:33 scale model of Thalkirchen Station specially for these workshops so that 3D explanations of important stages in the design process and related concepts could be more easily given. Using this model, work stations, breakout areas, meeting spaces, colour schemes and materials could all be presented clearly for discussion and agreement.

The project schedule and implementation were clearly separated from the services provided by the landlord which, in as far as was possible, covered the shell of the building and unimproved premises such as the floor, exterior walls and building services. CSMM also took care of the all-important matter of quality management for the tenant and acted as the point of contact for the building owner, their design planners and the companies undertaking the works:

A tight schedule from beginning to completion and Virtual Identity‘s eventual move-in made separating the responsibilities of landlord and tenant a challenge. Being involved in the early stages of the lease negotiations, however, meant that the tenant‘s responsibilities could be clearly demarcated. To this end, CSMM prepared the project schedule and the required tender announcement, supervised the construction work and kept Virtual Identity informed of running costs and estimated dates for completion.

A structure split into two clearly defined wings, and detached from the historic building itself, was constructed in the eight-metre high brick hall. The building‘s two floors draw attention to a centralised space that can be transformed into a stage by the staircase, which offers a fascinating change in perspective and has deep steps for sitting on or doing some casual work from a laptop. The walls of the building have been painted with a blackboard coating to create a giant surface for scribbling down messages, news and creative ideas.

To improve work flows and optimise communication among staff, various meeting spots were created in the form of closed, open and semi-open work spaces. Sliding glass doors and windows in the work zones can also be used to separate the work areas from the central ‚piazza‘ in the middle of the hall. Thanks to CSMM‘s structured design process, assistance with the lease and consequent advice and planning, the Virtual Identity team were able to move into their office on schedule and on budget for one of their legendary office warming parties.

Thanks to CSMM‘s structured design process, assistance with the lease and consequent advice and planning, the Virtual Identity team were able to move into their office on schedule and on budget for one of their legendary office warming parties. 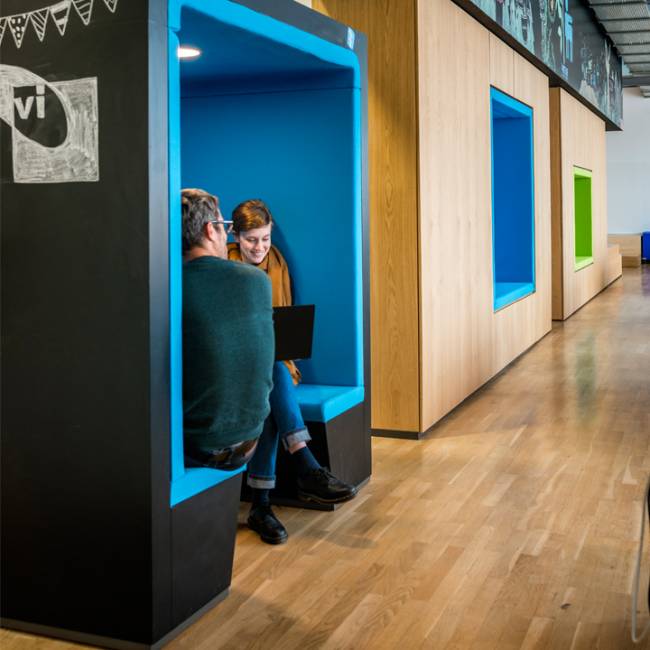